I once met Bob Dylan on the streets of Paris - Luna in the UK, part two: London

Posted by Joakim Bengtsson on 14 August 2015

We woke up, met Björn and went to a café and ordered bacon Bloody Mary’s. Ulrika got a vegetarian one. It’s true. They were spicy and nice. Had some breakfast as well and then we where off to meet Henrik and Sara at the train station and went together to Victoria Station in London. Said goodbye to Björn who was heading back to Stockholm. Me and Ulrika went to our small hotel opposite to Kings Cross station on Belgrove Street. Small but, we liked it anyway. London hotels are probably some of the worst in the world, at least some of the worst in Europe, considering the prices. But we didn’t really dislike this one, and it was easy to find. That’s worth a lot when you’re staying a very short time in a city.

We relaxed for a couple of hours and then went to meet Henrik and Sara again, having Italian food. I ordered half portion of cannelloni as a starter and then a Scottish beef steak as a main. A Barbaresco bottle of wine on the side. We went went to Barolo and Barbaresco in Piedmont in the northern Italy in July, I fell in love with the wines over there. That was while we where going to some Dylan shows, can’t beat combining good music with good food and wine.

We enjoyed our meal very much, Henrik and Sara weren’t going to the show, they had already got tickets for the Carmen opera. Me and Ulrika went to meet Andy and other Luna fans in a café in Islington. We had only met Andy once before so it was really great to meet him again. One of those guys there’s not enough good things to say about. He’s making the A Head Full of Wishes web site about Galaxie 500 related music. What’s not to like about such a guy. We also met Mike and Jon for the first time. Mike and Jon. Smiling again. I had a cup of coffee and then we walked north to The Garage, the venue. Opposite the The Garage I played with Henrik many years ago, I think that was our last gig and it was one of our best.


“Well, we’re not going to miss the band” someone said as we walked. Probably Mike. When we where about to cross the street we met Dean & Britta who was also heading north to The Garage. “How are you Andy”, Dean said to Andy. He’s such a gentleman, humble and nice. But you want to watch your words talking to him, don’t know why. Britta is always spreading good atmosphere around her, easy to talk to. You’re always a little scared of Dean even if he’s a gentleman saying “how are you” and smiling at you. The impression is that he listens very closely when you say something, I’m not used to that and you end up saying weird things, things that he will always remember. Maybe it’s just his weird clever lyrics that makes me overestimate his brain.

I once met Bob Dylan on the streets of Paris before one of his shows, it was close to the Bastille, where Avenue Daumesnil meets Rue de Lyon. I said hello to him and thanks and good luck tonight Mr Dylan, he was carrying a white box with both hands, I’d like to think it was a cake for his band mates. He stared back, lifted the white box up and made clear the he couldn’t shake my hand, because he was carrying a cake. Didn’t say a word, but that look. I still today can’t let go of that moment, a good moment, but scary. It’s almost the same with Dean. I wonder if Dean’s ever given his bandmates a cake.

Dean & Britta went into the venue on the right side of the building and we went in the regular way and waited in the front. We started to talk to two guys behind us that stood next to us at the Brighton show. They had been to a music festival recently, with their tents and all. Pretty cool for guys over 60 or whatever their ages where, can’t care less really. And that’s what’s so different from going to concerts in the UK compared to Sweden. Or going out in general. We don’t mix ages. For some stupid reason. That is one of the reasons why we like going to concerts abroad. Far away from Stockholm.

In the UK music binds people together, here it’s in many occasions the other way around. But I’ve found ways to pull me out of that, many of my best friends are much older than me and I like that. I noticed right away, in the front, that this concert was going to sound different. I was staring into a big wall of speakers with bass woofers under the stage. And when Flowers came on I found out I was not only right, it was an underestimation. The bass was very powerful. Could feel it in the chest. It was nice. 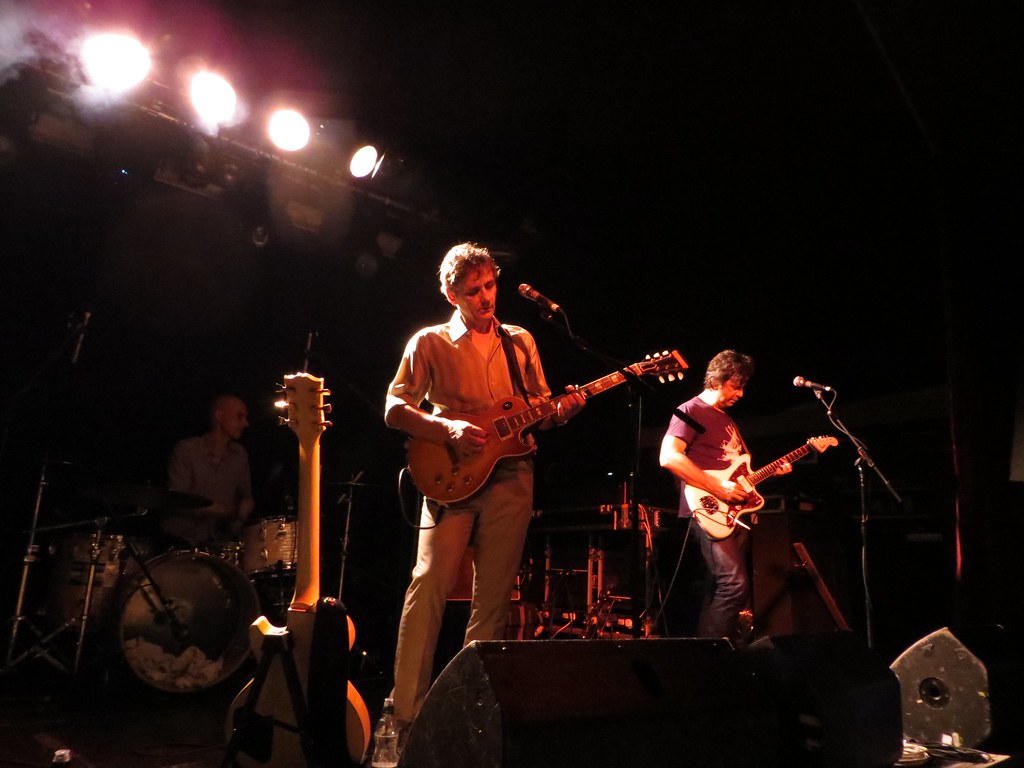 Luna did a much louder and more powerful gig than in Brighton. I’m not saying it was better, but different. I’m sure the band themselves much preferred it. With a much bigger audience as well. But there where a lot of chatting too, I liked Brighton a little better I think. Afterwards we met a Danish guy we had met in Barcelona as well. He liked the show but liked Barcelona even better. That is why I like going to several shows. It doesn’t matter which one was better really, they will be different, they will all be good experiences, some more memorable than others, but they will all be good for you. I know that. They played the Galaxie 500 song Blue Thunder again, like in Brighton, and Dean sang it much better, can’t be easy to sing that one, but no throat syrup needed in London.

After the show we started talking to a Swedish guy that Björn met in Brighton. He used to work in a record store close to where we live in Stockholm. We have mutual friends and I kind of recognised him but we’ve never spoken to each other. He knew about my old band Twig he said but I don’t know about that. He’s in a side project with Johan Duncanson that’s in the locally famous indie band Radio Dept. I used to see them live and got their first releases, when their debut CD Lesser Matters came out it became an instant classic.

We talked about the gig and we had very different opinions. He likes short pop songs, I like that too of course, but most of all I like long songs that preferably ones that never end and take different directions. 23 Minutes in Brussels is too much rock and roll he said, I didn’t know what he meant really, still don’t. If that’s too much rock and roll, well then I like too much of rock and roll. We stayed at The Garage until they closed and me and Ulrika walked back to Kings Cross, to our tiny but not too dirty hotel room. The breakfast the morning after was very weird. The orange juice was not drinkable, worst I’ve ever had. I don’t like sugar substitutes. Not in candy, not in sodas or anything. People bake with sugar substitutes and says it tastes good. It doesn’t. I much prefer having nothing at all than something with sugar substitutes in it. The bacon was OK and the beans too, the eggs tasted funny. We went to the train station and ran into Jon and Mike again. We only spoke very briefly in London. They where nice and offered us seats next to them, I ordered a danish with a sliced plum on top. We where all going to Leeds.