Dean Wareham vs Rick Moody in the Daft Punk debate 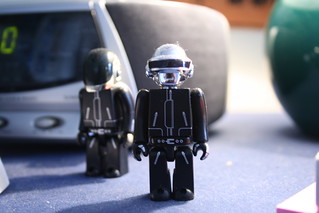 Dean Wareham was sucked into a debate with journalist Rick Moody on Facebook about the validity of French band Daft Punk and the Grammy they received for their album Random Access Memories.

After Mr Moody laid down the gauntlet describing the album as "among the very worst, most cynical, and utterly vapid records of the decade" Dean, who had previously praised the album in a review for The Talkhouse, wasn't going to let that lie and the Facebook debate was then developed into this discussion carried out in email and just published on Salon.

I find much to enjoy just in the first 30 seconds of “Get Lucky.” I don’t know if you can call it admirable (yes, you can) but it works on my ears. It’s a simple bag of tricks; they build it up, they break it down, removing the rhythm section and then bringing it back, much as Chic might have done, or the Rolling Stones in ’78, or the Clash a couple of years later — anyone creating an extended dance mix. And these are pleasurable moments; the moment the bass reenters is tasty, and for me the entrance of the robo-vocal is surprising and exciting. Up ’til then it could be anybody. The track is a triumph of production and musicianship. New gestures? Not so much. Still, I don’t think anyone else has done it better than this. And this is what Daft Punk do — they mine yesterday’s trash, they recycle tired sounds but recombine them in new ways, and generally with humor and musical intelligence

The discussion gets very detailed and occasionally technical, I'm not going to try and cherry pick bits because the whole thing is worth reading, for no other reason than for being slightly baffled at Mr Moody's stance and impressed by Dean's level-headedness and patience.

Music journalist Pete Paphides picked up on it on Twitter

@WarehamDean Just read yr debate with Rick Moody. You showed saintly patience. I don't know anyone who listens to music the way he seems to.

Head on over to Salon to read the whole debate.