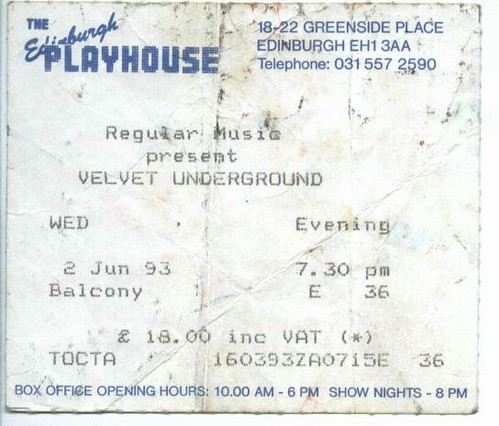 2 June:
We are well rested and perform better tonight. The Velvets show is very different. They play the same songs, but it is apparent that Lou is going to do a fair bit of improvising, playing with tempo and structure. Sterling Morrison is playing bass on some songs, rhythm guitar on most (and he's a great player, all upstrokes), and a couple of great guitar solos on "Rock and Roll" and "White light, White Heat." Moe Tucker is amazing. She stands over her unorthodox kit for two hours, banging away, or maybe playing only a tambourine, or just the cowbell ("Some Kinda Love"). People will tell you that a band is only as good as its drummer - this is certainly true of the Velvets. Moe's stripped-down kit and style of playing are a huge part of the band's sound (listen to 1969 Velvet Underground Live against Live at Max's Kansas City, where Moe is absent, and you'll see what I mean).

I'm sitting up in the balcony and the guy behind me keeps calling out for "New Sensations." After the show we meet Sterling, Moe and Lou, who are all very friendly. Lou is especially funny in a very New York way, with a dry sense of humor.

I can't sleep tonight, due to jet lag I suppose. Justin and I sit up late watching Red Sonja on TV, and then World Championship Snooker. I keep hearing funny noises-either it's the seals in the zoo or else it's Stanley and Sean next door. I never do find out.