A Head Full of Wishes elsewhere: all over the Internet like a rash (slight return)

Not done this for a while so... a little plug for where else you can find A Head Full of Wishes out there on the 'net...

The A Head Full of Wishes Facebook page is growing and while it's not quite buzzing with activity it ticks over rather nicely - getting close to 900 "likes" - while I'm not one to put much store by these numbers still nice to see that there's still an interest.

A Head Full of Wishes is also on Twitter as @ahfow - mostly it's just links to stuff I find and stuff post - if you want more discussion you can also (or alternatively) choose to follow me - @grange85 - but you will have to put up with all the other nonsense I spout!

The Mailing list is very quiet these days - it'll have the occasional spurt of activity (and it's lovely when it does) and if I was a better caretaker I'd take better care of it. Come join us anyway!

There are a few releavant groups on Flickr:
The main one called (surprisingly) A Head Full of Wishes has close to 700 pictures in its pool and is growing constantly.
There's my failed A Fashion Parade of Wishes - where folk (mostly me) can share pictures of them in their AHFoW related fashion (T-shirts) - just 19 pictures.
There's also You Turned My Head Around which catches pictures of Britta at a certain moment in a certain song - 38 pictures, but it's been out of the setlist for a while.
The Galaxie group - that wasn't set up by me but was set up for "any excuse to name a photo after a Galaxie 500 song, or for that matter Luna and similar/related music" finally succumbed almost entirely to photos of cars... except when I belligerently post a picture!

I've also set up a Pinterest board to post some of the more quirky (or plain awesome) pictures I find.

I also run the official Galaxie 500 page on MySpace but have to admit that I mostly don't - but I let myself off because Damon & Naomi asked me to run it but they've not been updating their MySpace page either!

If you just want links you can keep an eye on my ahfow tag on Pinboard which I use to manage my links. 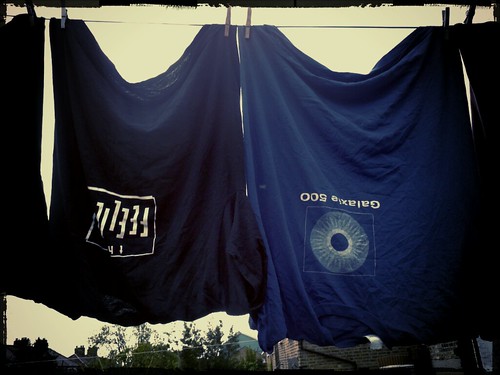