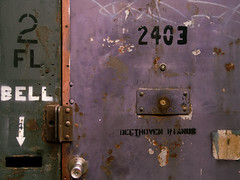 It’s Bringing You Down was released on an EP on No.6 Records which was the label run by Terry Tolkin who features in depth in Black Postcards and got a name-check in justin’s fake-telegram at the last Luna shows. As far as I’m aware the EP has never been released digitally and the only hope of laying your hands on it is second-hand – .

I hadn't listened too much to this EP for years but was inspired to recently because one of the tracks on it, The Enabler, has been revived to accompany Dennis Hopper in 13 Most Beautiful. It's Bringing You Down is a cracking lost Luna track. I hope you enjoy it.

Mp3: It's Bringing You Down by Luna (on Box.net)