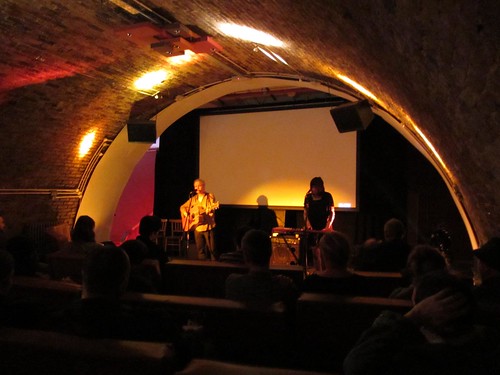 I got off the bus just as the heavens opened, not too sure where to go... surely this crappy dead end leading to an industrial estate couldn't be where Damon & Naomi were playing? I tentatively made my way into the darkness - found first an ankle deep puddle and then, eventually, the Whirled Cinema Club. The venue itself was lovely, in a railway arch, and I wandered up the stairs drenched, glasses steamed up and found a spot near a radiator.

First act was Woodpecker Wooliams who, with a harp and distinctive vocals, will probably spend all her time fighting off the obvious comparisons - this she did on Sunday by, one song in, pulling on an oversized shirt, a hat, painting on a moustache and eyebrows and making a charming synthesized racket that was a long way from Joanna. She finished by getting a small and fairly reserved looking audience singing along to Wham's Last Christmas. I, of course, didn't join in.

Next up Birdengine was actually just one chap, an acoustic guitar, loop pedal, and some unwanted buzzes and crackles. He was ok but Woodpecker was quite an act to follow.

Between acts I chatted to David and we were then joined by Naomi. We discussed film... David and Naomi discussed arty foreign films... I brought Star Wars and Kiss Me Kate to the conversation.

Damon & Naomi were playing as a duo tonight, and played through a lovely set while behind them was projected suitably cold and wintry pictures (and occasionally the Mac OS, and sometimes just the word BLANK). The set-list included mostly tracks from their last three albums with an occasional reach back a little further... in very approximate order (and possibly omitting a track or two):

The set closed with me checking my watch and worrying about whether I'd get to Green Park in time for the last Piccadilly Line back to civilisation. Fortunately David dropped me to Brixton tube station and I made it home... still a little damp but, as always, thoroughly satisfied.

The venue was dark, particularly the side that Naomi stood, and I was unfamiliar with Hazel's camera that I'd borrowed for the occasion so there are only a few pictures and none are that good. You can see the rest on Flickr.

Damon & Naomi then headed off to Italy, here's a video of them playing Nettles and Ivy in Torino a couple of days after their London show.