Many years ago when I put together the (very long neglected) FAQ for the web page I included the question "What is a Galaxie 500?" and for a while actually had trouble finding a picture of the car to include as evidence of where the band pinched their name. Eventually someone sent me a picture, and then I started just linking to the Yahoo! category (remember, from the days when Yahoo! was a directory!) I never, knowingly, saw one in real life until the Goodwood Revival in 2002 Nowadays the car is better represented on the web than the band - most (new) "Galaxie 500" pictures on Flickr and videos on YouTube are of the car. It doesn't bother me, maybe because, despite not being the sort of person who cares about cars (don't own one, don't want to) I quite like looking at these gas-guzzling monstrosities from an era when a car could look individual and no one cared what damage it might do to the environment. Anyway I do like looking and I mostly like looking at the logos - so i put together a gallery on flickr of some of my favourite pictures of the varied Galaxie 500 logos... Here's a picture of my son Adam patiently appeasing his boring old man by posing next to a Galaxie 500 in 2003... 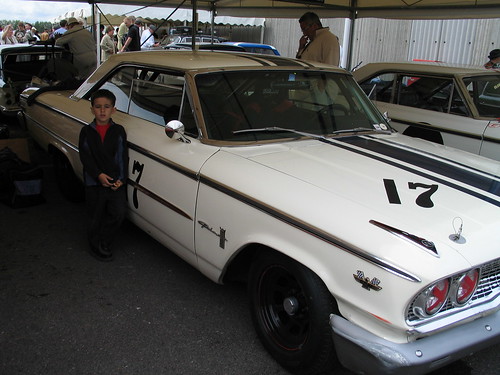