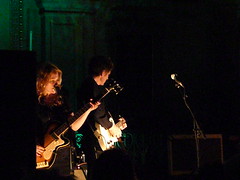 Dean & Britta are not Galaxie 500, just like Luna were not Galaxie 500 and sometimes that makes it hard for me to be rational. Nothing is better than Galaxie 500 were and if I try and measure anyone up against that yardstick they're all going to come up a bit short. I just need to stop measuring.

The Dean & Britta show last night was a gem. There were flaws but those were caused by the venue and me not by Dean & Britta (and support Cheval Sombre) who put on a great show.

Firstly the venue. I'm fond of churches, which for an atheist is an odd thing to say. But I do like the cold and air and atmosphere and space, I like the respect that people have for that sort of environment and I like the sound that music has in these big stone spaces. Particularly rock music. But there was no stage, the band were set up on the small step up to the altar. The way the PA was positioned such that only the people lucky enough to sit down the centre would get a view of the whole band, and thanks to the celebrating Algerian football fans who kept me on a stationary bus for 20 minutes, I wasn't one of the lucky few. There's no raked seating in a church so all but the front row had their view impaired by the heads of the folk in front.

So I arrived shortly before Cheval Sombre took to the stage, hooked up with David and settled down in a pew with as good a view as we could expect at this late stage. Cheval Sombre played seated, accompanied by a seated Sonic Boom. I think Britta (who accompanied them) may have been standing... but she was standing behind the PA (except when she sat behind the drums). Dean played guitar on a couple of songs and stood... in my eye line. But I never saw too much of the set. It was a good show of Cheval Sombre's spacey (in feel not in content) songs with Sonic Boom's drones washing all over it. 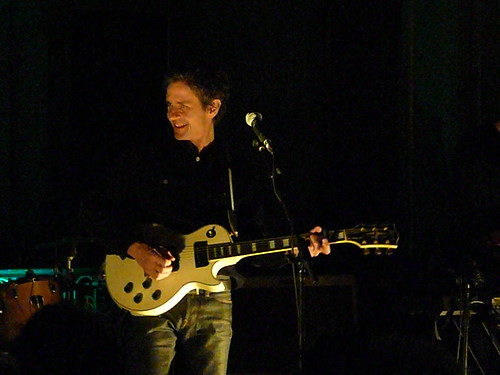 For Dean & Britta I decided to stand up against a pillar at the side of the church, this meant I couldn't see Britta at all but at least I could see the rest of the band. They launched straight into Tugboat and proceeded through a nice mix of Galaxie 500, Luna and Dean & Britta songs. Highlights were the Galaxie 500 songs, because, once I accept that Dean & Britta are not Galaxie 500, then Hearing Voices was lovely and even Snowstorm (which was previously on the receiving end of a sacrilegious rant) was beautiful. The keyboards were less intrusive and the drums seemed better suited.

They encored with Night Nurse and a fantastic Ceremony and it was all done in little over an hour. Two and a half years wait and it all seemed over so quickly. I went and shared an uncomfortable few minutes with Dean & Britta and then spent the journey home thinking of all the clever/insightful/interesting things I could have said. I wish I was better with people... particularly people as nice as Dean & Britta - they deserve better.

Here's a shot at the setlist - the order is almost certainly not right and there maybe some tracks missing. Please feel free to correct any mistakes/omissions.

There are a few photos on Flickr (and a couple extra on Songkick) and there'll be some videos on YouTube later. I took quite a few but my FlipHD struggled with the low light and the sound and so they're all rather disappointing.