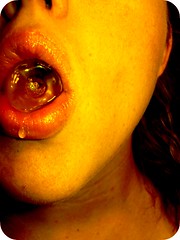 I came across a podcast named after and featuring this "lost" luna track. Sucking Ice Cubes had its only official release as a bonus track on the Japanese release of Bewithced and in my opinion deserved a wider audience than that. Not a throwaway, a demo or an instrumental, Sucking Ice Cubes starts with guitar feedback (probably squalls of feedback because feedback always comes in squalls) not the expected start to a Luna song and carries on like it might have been a live gem if it had been given a chance - I can close my eyes and imagine this developing into the sort of stage classic that Black Postcards and 23 Minutes got to be...I can't imagine Dean & Britta doing it though...maybe it rocks too much?

I thought that it was probably time to start exposing some tracks that made obscure appearances and deserved to be heard by more folk. Up until now I've been reluctant to share officially released music but have made exceptions with tracks that have been hard to get hold of. If the copyright owner is bothered by my sharing of this track they should get in touch and the track will be removed.