Admin: Keeping everything in its rightful places... 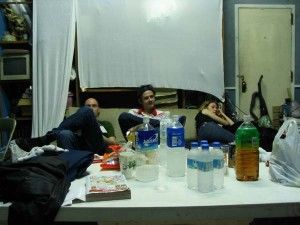 Wake me up when he's finished...
picture from fuzzywuzzy.com

This is a really long and tedious post about managing links and tagging and it exists only as a reference and because I think really ought to document this sort of thing so that my grandchildren will be able to see just how truly, truly sad their granddad was . Unless the very un-rock'n'roll subject of managing information is your thing I suggest you should probably not read on...

Over the years one of the things I've failed to get under control is keeping track of what's on the Internet that could be of interest to visitors to A Head Full of Wishes. In the past I've tried to build a links system into the database (that got too unwieldy too quickly) and tried to use the Open Directory Project (which was (rightfully) too restrictive in what I could add). About three years ago I started using the social bookmarking site delicious to try and keep track of things but my efforts where ill-conceived and half-hearted. Things have got better in the last couple of years but I would tag things and the last few would show up on the AHFoW home page but once they drifted off the bottom they were pretty much lost.

A year or so back I pinched last.fm's tactic of enabling users to tag photos on Flickr so that the photos of a specific event could be pulled into that events page on last.fm. So AHFoW users (actually mostly me) could tag their Flickr photos of a Dean & Britta or Damon & Naomi gig and have them show up on this website. In order to do this each gig was given an event ID (actually it already had one in the database) and a tag was constructed using the namespace:precdicate=value syntax that Flickr calls a "machine tag" and has been used to geotag photos and is what last.fm uses for its system.

It occurred to me recently that a similar system could be used in delicious to keep track of other relevant things on the Internet, not just photos but plog posts, reviews, interviews and videos - in fact anything relevant with a URL could be tagged and traceable. Each event already had a suitable tag (from the Flickr system) but I decided to extend this to include every artist, track and album.

So now a video on YouTube of Galaxie 500 playing Tugboat at the Commonwealth School in Boston would live in three places on A Head Full of Wishes...

And added to that there are all the "proper" tags that I and any other delicious user can add to an item. Everything has a place and most things have more than one place - this is an attempt to embrace what David Weinberger’s Everything Is Miscellaneous calls the third order of order.

Another potential benefit of the system is that I could make use of A Head Full of Wishes visitors to help me keep track of what's out there - anyone can add the Tugboat tag to a relevant website and AHFoW will find it. Unfortunately the nature of the tags makes them not very intuitive - it's not easy to remember that the tag for Tugboat is ahfow:trackid=9 so I suspect that not too many visitors are likely to be helping out.

The three (other) down-sides to the system (that I'm aware of) are...

So there it is, if you've made it this far then congratulations and I'd appreciate any comment or input on this - it might seem like a small thing because ultimately all it really does is collect links and links is what the WWW has always been about anyway, but hopefully it will begin to organise all the really interesting Galaxie 500 related content out there.