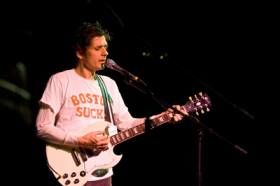 Dean has posted another lengthy post on the official Dean & Britta blog - they may be sporadic but they're big and packed with sex, drugs and rock and roll when they do arrive...

Cold as it was that day, it was hot on stage at the Cedar Cultural Centre, and I had to remove my sweater during the show, revealing the T-shirt that I wore in my bunk the previous evening: BOSTON SUCKS. Of course a photo of me in that shirt quickly appeared on the internet. That’s the way it is now. Someone is always videotaping or photographing you on stage, as Michael Richards learned.

Our friends at Zoe/Rounder are based just outside Boston, and I did receive a query from our product manager on the offending shirt.

“It’s not the people, or the city of Boston that suck,” I explained. “The shirt refers only to your baseball team.”