Tell Me Do You Miss Me: DVD artwork preview 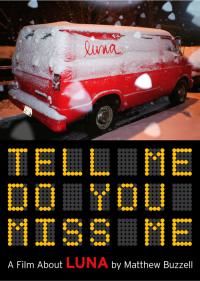 Film director Matthew Buzzell has sent me the front cover of the DVD release of the Luna documentary Tell Me Do You Miss Me. The sleeve was designed by Frank Olinsky who previously designed the sleeves to most of Luna's CD packaging since Penthouse. The photograph was taken by Galaxie 500 list member Lenore Holz

Click on the image to see a larger version